The Spoof of Rabbi Asi

This spoof – The Spoof of Rabbi Asi – was originally posted (in Hebrew) in Hoshvilim in September, 2008 as an exercise in social media marketing. Since it has been shared "virally" in Arutz 7, Nashim, and online Arutz 7 who published the information without checking their sources or visiting the sites. Since then, the uncovered spoof has been reported in Ynet after interviewing "Hoshvilim" and reprinted by Rotter, KaduriNet, 08News, and Behadrei Haredim. Kobi Ariel of Galei Zahal discussed the Rabbi Asi spoof on the January 2, 2013 morning program.

For non-Hebrew speakers we are publishing an English translation of the original spoof.

The Grave of Rabbi Asi the Saint

The grave of Rabbi Asi the Saint, found in the channel of the Nachal Kohanim riverbed, is marked by a natural headstone engraved only with the words "T' Asi" or "To Asi". Rabbi Asi (or alternatively Yasa, Yasah, Yosa, or Isi) was a famous Talmudic Scholar of the Amoraic Period in the Land of Israel, one of the leaders of the Third Generation of scholars. He was a friend of Rabbi Ami, and like him was also a member of the Kohanite (priestly) caste. Rabbi Asi was born in Babylon and emigrated to the Land of Israel where he studied Talmud together with Rabbi Ami in the Yeshiva of Rabbi Yochanan in  Tiberias.

In the memory of Rabbi Asi it was traditional in the late Amoraic Period to participate in ceremonial dances performed in Nachal Kohanim. In the Byzantine Period and later in the Arabic Period the grave in Nachal Kohanim was protected as a holy place and a center for pilgrimages, mostly by Moslims and also by Christians of the neighboring villages. After the regeneration of Jewish settlement in Zippori and Hoshaya in the independent State of Israel, Jewish pilgrims have returned to visit Nachal Kohanim and the grave of the Holy Rabbi Asi. The pilgrims pray and plead for his blessing asking for universal joy and happiness. 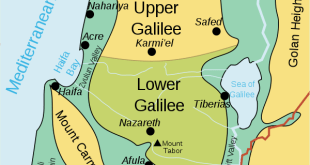