Deutsche Welle is a German journalistic conglamerate in 30 languages including Persian. The following article appeard in Farsi in the DW online news site on 17.12.2013 following a visit by Iranian journalist J. Talei in Elkana, Israel. Imagine that!! Although the translation from Persian leaves much to be desired one can still get  the jist of the article. In Persian, as in German,the verb comes at the end of the sentence which makes it much more difficult to translate

America's president has announced that peace talks should be concluded by the end of July 2014. The Israel's settlement policy is the biggest obstacle to peace. Read about my journey to Jewish settlements on "Palestinian land".

J. Talei in cooperation with  Persian DW is one of the few Iranian journalists who have traveled to Israel.

Elkana is a Jewish town in the area called Shomron. The distance from the Shomron to Tel Aviv is  just 30 km and Petach Tikva is about 15 km. The neighborhood is separated by a fence from nearby Palestinian villages in the West Bank. A barbed wire fence, not too tall, separates Elkana from Palestinian neighbors.

The report is evidence of expandsion of Jewish settlements in the "occupied territories" up to a critical strategic dimension – and seems to simply ignore the policy of the Israeli government.

Prior to the Arab-Israeli Six-Day War in 1967 there was in Elkana a British military watchtower left from the Mandate period. 10 years after the 6-day war, the Israeli government sent 15 Jewish families to Elkana to live in the British army building, then empty. Israeli troops had to be deployed to protect them.

A…. is married and his family has five children, is one of the first residents of Jewish settlements Elkana. "A…. moved with his parents to Elkana in 1980 when he was ten years old.

A…. explained the importance of settling those 15 Jewish families Elkana, "If the Palestinians had been here, they could have bombed Tel Aviv (from the strategic high point) and Jerusalem, too. For this reason it was decided that Jews had to be living in Elkana. They first settled at the British base where there was a large hall,  pulling the fabric between wall to create "rooms", till they started to build small homes. "

A…. then showed  me all the homes built in the early years, and now known as  "Old Elkana" . The footprint of the small houses includes a living room, a bedroom, a kitchen and a small bathroom but the area does not exceed 50 square meters. Some of the first settlers in the town Elkana still live in the same houses.

The old British base was built of stone. A…. showed me a large patchwork wall cloth tapestry made of 150 pieces of squares 20X20 cm. Each square lists the name of one of the first 150 families in Elkana. The tapestry was created for the 13th anniversary of the founding of the Elkana.

The population of the town has now reached 900 households, each in their own large and beautiful villas. Elkana has a synagogue and cultural center, three primary schools, several stores and restaurants, too. However, the main needs of town's residents continue to be supplied from Petach Tikva and Tel Aviv. They can just drive along the highway leading to the big cities. Public bus transportation bring passengers quickly to Tel Aviv or Petach Tikva. The government subsidizes public transportation for the settlers.

Palestinian towns as seen from Jewish settlement of Elkana. In the wake of the Second Intifada, Palestine is completely cut off and there is no communication between the two towns.

From their window, A….and his wife one can see Palestinian villages of Meskha, Bidia, Bani Hasan, Sineria and Beit Amin just 200 m to 500 m away from Elkana.

I asked A….: "Do you have any relations with the Palestinian neighbors?" He sighs and says, "I came here when I was ten years old. During my childhood and adolescence dozenss of Palestinian children went to school and even did some traveling with their  family in Israel. But since the Second Intifada by the Palestinians, all routes of communication are closed. I still regret the loss of friendships we had. "

Negative effects of the Second Intifada

The Second Palestinian Intifada, which began in 2000, when consevative Prime Minister Ariel Sharon entered the Al-Aqsa Mosque that belongs to the Muslims.[Actually he visited the Temple Mount and did not enter the Mosque.- ZPC] Muslims began to protest Sharon and clashed with Israeli police and rioted throughout the West Bank and Gaza Strip. That began the Second Intifada.

An Israeli banker, close to the "Peace Now" movement  in Tel Aviv, tells me: "I think Sharon entered the Temple Mount deliberately to cause Israeli-Palestinian tensions and create obstacles to peace. He was among the politicians who were not happy with the negotiated agreements achieved by Yasr Arafat and Yitzhak Rabin,  and considered it contrary to the interests of Israel. "

Yitzhak Rabin was twice prime minister of Israel in 1974 to 1977 and 1992 to 1995. In 1994 for his efforts for peace and recognition with the Palestinian Authority, he, Shimon Peres and Yasser Arafat were awarded the Nobel Peace Prize.

Rabin was assasinated by a Jewish extremist called Yigal Amir on November 4, 1995 . The site of his assassination in front of Tel Aviv City Hall is now called the "Rabin Square" and is one of the most important tourist centers in Israel.

Ariel Sharon went into a coma on 4 January 2006, after nearly ten years, there is still hope. After all, Israelis spend exorbitant cost to keep him alive. Sharon is now 85 years old.

Living with nostalgia and the dream of peace.

A…. remembers nostalgically the peaceful life in childhood and adolescence with his Palestinian neighbors. We asked him, "John Kerry, American Secretary of State, has high hopes that the current peace talks between Israel and the Palestinians will bear fruit next summer. Do you shared this optimism? "

He replies, "Honestly, no. Despite all the efforts, it is the Moslim fundamentalists that has prevented peace efforts. I think ordinary Palestinian people desire peace betweem Palestine with Israel. But fanatics do not want peace. "

Expansion of Jewish settlements continues to be one of the main obstacles to peace between Israel and Palestine, despite international protests.

Elkana was the first choice for settlement 36 years ago. Now they are renovating older buildings to provide more and better homes. We ask A….'s wife: "Don't you think the economic benefits of continued settlement for construction companies also plays a role in politics? She replied, "They are backed by the government, which provides cheap land, and create a huge benefit to people who are tired of high prices of housing in major cities."

She says, "The settlement policy is an ideological and strategic issue. It is not about economic incentive. Jews have lived in Israel for thousands of years. Palestinians say this land is theirs now. Unfortunately the government wants to extend a freeze on Jewish settlements here. "

The growth of the city of Elkana confirms her comments. In 1977, when only 15 Jewish families settled in the area, maybe transfering them could have been acheived peacefully, but now Elkana city is home to a 900  Jewish families and transfer is no longer possible. Due to the large Jewish families, the population of the town now is more than five thousand people.

In the interview with A… and his wife we went to see the new synagogue in town, which was recently built in Elkana and looks more like a cultural center. A…. says there are Jews from many countries in Elkana: Europe, North Africa, Yemen, Ashkenazi and Sephardi. Each has a separate synagogue in Elkana with a large common area. This makes it possible for all the groups to meet coming out of the synagogue. "

In one of the rooms of the New Synagogue there is a group of ten year old childen with a young man sitting at a table teaching them how to read the Torah. Jews read the Torah with a particular melody. The scene reminds me of the old schools in central Iran, where the mullahs taught children to memorize with melodies.

When returning from Elkana,  A…. drove me with his own car on the highway leading to Tel Aviv. On the way to the border with Israel on the West Bank approaching the border control post near Elkana,  I saw a sign for an exit to "Kafr Qasem". The name of the city has been carved in my memory.

A Border Control between Israel and the West Bank in the evening. Those West Bank Palestinians with work permits can go through this crossing and enter Israel.

The village of Kafr Qasem has been part for Israel since 1948. For the first few years of statehood, the city was under military government, which has since been replace by normal civilian government. On Oct. 29, 1956, residents of Kafr Qasem broke the military curfew and were shot by Israeli soldiers – 49 Palestinians were killed. Israel was established just 8 years before and 6 years before I was born.

Writing posts in the West Bank, I feel the dual emotions. On one hand, I felt attracted to freedom and capability of the Israeli society and sad about restrictions that have been imposed on the Palestinian population. A…. stopped his vehicle to respond to a guard. I asked him: "Do you think I can get a picture of the border post?"

I was  slightly hesitant. Something told me that the translator will translate: "Take a quick photo, but the soldiers may come. Do not show your papers. That may cause trouble. "

I took a photo and we drove off. 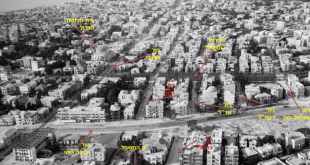 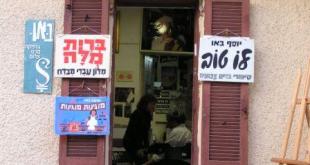 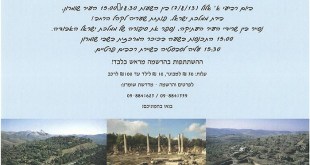